According to recent dog bite statistics, in 2022 there will be nearly 100 million dog bites worldwide, with approximately 10 million occurring in the United States. Among all age groups, younger children are more likely to be bitten by a neighbor’s or family dog than adults.

Children are also more likely to receive medical attention for dog bites than adults. It is important for adults to supervise the interactions between children and dogs, especially when they are unfamiliar.

Dog Bite Statistics: Everything you need to know

The United States population in 2019 was 328.2 million people. According to the American Veterinary Medical Association (AVMA), approximately  4.5 million people, or 1% of the population, are bitten by dogs every year. About 800,000 of those bites result in medical treatment in the US. Dog bite statistics indicate that there are various reasons why dogs bite:

All these points must be kept in mind when you are around a dog. Further, keeping dog bite statistics in mind can ensure that you are alert, potentially preventing a dangerous canine attack.

All contributing factors from a dog bite incident must be considered to build a strong legal case. Following, we’ll detail dog bite fatalities by breed: 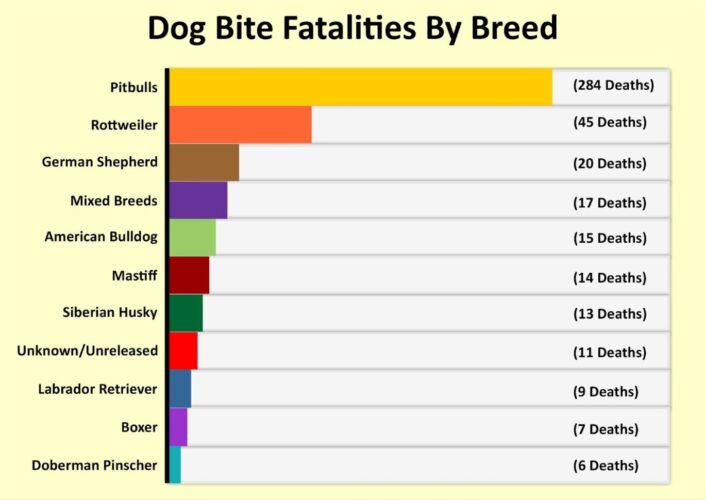 Dangerous breeds of dogs highlighted in (%) 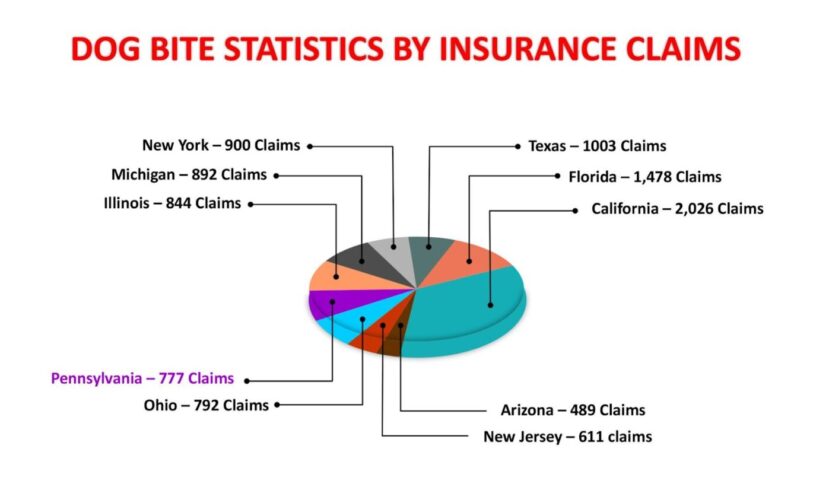 1. Which Breeds Have The Strongest Bite?

However, these dog breeds are often well behaved when they are trained or under the guidance of responsible owners.

2. How To Protect Yourself Against The Risk Of Dog Bites?

Dog liability insurance is one way to protect yourself in case a bite occurs. In addition, it will help you if your dog bites someone else. This insurance policy will cover all the costs and other medical expenses of the victim. According to the Insurance Information Institute (III), the average cost spent due to dog bites is nearly $37,000. About one-third of dog owners use this type of insurance policy.

3. How many people on average have been admitted to hospitals after a dog bite?

Dog bite victims are certainly no strangers to the emergency room. According to statistics published in 2010 by the Agency for Healthcare Research and Quality (AHRQ), the number of people sent to ERs or hospitals from dog bites has approximately doubled since 1995.

4. What is the ratio of men and women who are affected by dog bites?

The vast majority of dog bite victims are in the younger demographics. Just over 73% of victims going to ERs and 51% of those hospitalized for dog bites were under the age of 45.

5. In which geographic areas are dog bites more prevalent?

6. Which are the most common injuries caused due to dog bites?

The study also revealed that hospital stays for dog bite victims were approximately 50% more expensive than hospital stays for other types of injuries. Injuries treated in dog bite cases included infections, open wounds, and fractures. Although personal injuries like dog bites are rarely fatal, these attacks are still potentially life-changing in other ways.

7. What is the average cost that dog bite victims have to spend for their medical treatment?

Have you been Injured by a dog? Contact The Law Offices of Samuel Fishman

To file a dog bite claim, the claimant must prove that another party is at fault for the injury. This may involve proving negligence, recklessness, and/or intentional misconduct.

If you’ve been bitten or attacked, our Philadelphia dog bite lawyers are ready to help. They understand the struggle of filing a personal injury case, as well as what it takes to aggressively pursue compensation for your pain, suffering, and medical bills. Call our law firm now to discuss your case in a free consultation.