How Can A Competent Philadelphia Motorcycle Accident Lawyer Protect Your Interests?

Unlike cars, motorcycles do not have crumple zones to absorb collision impacts. This is because there is no outer protection to keep the driver safe.

Understanding the losses and damages that a motorcycle accident victim can face is important. One of these crashes can cause short- as well as long-term damage to you and your health.

Therefore, it’s important to find an attorney who can represent your case vigorously and maximize your potential for a good financial recovery.

What are some common reasons for motorcycle crashes in Philadelphia?

Sometimes, it can take a while before problems directly attributable to the motorcycle accident become apparent. If there has been an obvious injury like a fractured arm, major cut, or bruise, victims may have a personal injury case.

If dangerous conditions were not adequately marked or managed, victims can surely benefit from contacting a competent Philadelphia motorcycle accident attorney.

The potential causes of motorcycle crashes are numerous and can include:

You must report the incident to local authorities if a motorcycle collision occurs. Injured victims must also collect evidence if the other drivers violate traffic rules. This aids in establishing liability.

Which types of injuries can result from motorcycle accidents? 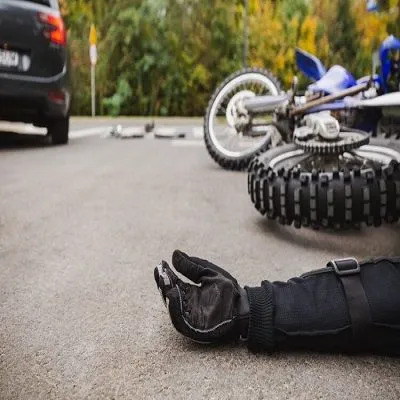 Motorcycle accidents can be deadly, and they are becoming increasingly common on the roads of Philadelphia. These accidents often cause worse injuries than other motor vehicle accidents. This is because most motorcycles lack the same caliber of safety features, such as airbags and seatbelts, and the rider is fully exposed to the outside.

Generally, motorcycle drivers and passengers have very little protection. Sadly, many other drivers around them are distracted by their cell phones. Some truck drivers also continue to drive improperly loaded tractor-trailers that they cannot stop quickly.

A negligent car or truck driver can cause injuries such as head injury, spinal cord injury, and other injuries that may permanently disable or kill the biker. Injuries that can result from a motorcycle are not limited to but include:

Some serious injuries are not apparent until hours or days after the accident. Still, these issues may require extensive medical treatments or physical therapy. Along with this, full recovery can take years and sometimes may not even be possible.

The most catastrophic accidents cause permanent physical injury or death. The pain of such tragedies can significantly affect victims, and their families, emotionally, and financially.

What should you do after a Philadelphia motorcycle accident?

To get compensation, it is important to determine that the accident happened due to the negligence of someone else. Speaking with a Philadelphia personal injury lawyer soon after the accident will ensure you understand your legal obligations. There are some important steps that you must follow after being involved in a crash:

Being thorough after an accident will ensure that evidence is available to document what is needed to prove your situation and any injuries that you may have.

Who owes you damages in a motorcycle collision?

There may be more than one defendant in a motorcycle crash case. However, motorcycle riders can be sued if they are negligent when they drive. For example, bikers can cause crashes from speeding.

In other cases, motorcyclists may be injured due to the carelessness of the other driver. If this happened in your case, seeking immediate advice from a Philadelphia motorcycle accident lawyer can help protect your rights.

Suppose a motorcycle collision occurs at a construction site. In this case, blame might be placed on the construction company for negligence. If an accident results from bad road conditions, the government can even be held liable for negligent action. These government entities may include townships, municipalities, or counties. However, there may be a limited statute of limitations for filing a lawsuit.

What economic and non-economic damages can you get after a collision? Even if a biker is lucky enough to survive a motor vehicle accident, the road to recovery can be hard. For one, recovery can take years. However, if another party caused the accident that resulted in your injuries, you may have a viable injury claim for which all your treatment can be covered.

Motorcycle accident survivors may be entitled to many types of damages, or compensation, for their injuries, including:

Why are motorcycle accidents more dangerous than other injury cases?

As bikers are more exposed than car occupants, motorcycle accident injuries are more serious and more often fatal than car accidents. In addition, bikers are often unfairly judged as careless. This can make it more difficult to receive compensation as a victim. Compared to car crash scenarios:

It’s important that all bikers abide by traffic rules and regulations and wear safety gear, but even these things cannot fully prevent severe injury and even wrongful death in more severe cases.

In a perfect world, there would be no devastating motorcycle accidents. But as we all know, the world is far from perfect. And unfortunately, that means every year there are a tragically high number of motorcycle crashes.

For motorcycle riders, the risk of being involved in an accident is high, and the consequences can be catastrophic or fatal. People are more likely to take safety seriously if they are aware of motorcycle accident statistics. According to those statistics, motorcyclists are killed on roads and freeways every day.

A significant percentage of motorcycle injuries could be prevented by not speeding, not driving under the influence, and staying alert. Many more crashes could be avoided with defensive driving practices.

Statistics for Motorcycle Accidents In Pennsylvania And The United States

The Pennsylvania Department of Transportation (PennDOT) reported that in the year 2020, there were 215 fatal crashes caused due to motorcycles, 2960 crashes causing injury, and 224 crashes that caused property damage. Nearly 93% of motorcycle crashes resulted in an injury or death in 2020. PennDOT also observed that for motorcycle riders, 42.9% were wearing motorcycle safety gear such as helmets when the accident happened.

According to PennDOT in 2021, the number of licensed motorcyclists was a whopping 807,444. And according to CBS News Philadelphia, there have been many motorcycles crashes taking place across Philadelphia in 2022. One such motorcycle crash occurred on September 25, 2022, when a motorcyclist died after crashing into three cars in Allegheny.

These figures highlight the importance of taking every available safety precaution when riding motorcycles.

Motorcycle Accident Statistics Comparison Of 2014 And 2015

Nationally, 4,500 motorcycle fatalities occurred during the first nine months of 2011. In 26 states and the District of Columbia, fatalities due to motorcycle accidents increased, while the number dropped in 23 states.

In 2008, 237 motorcyclists were killed in Pennsylvania accidents, and 4,077 were injured. Nearly half of bikers who died, 49%, were not wearing helmets, and 32% of motorcyclists who were killed had blood alcohol levels of 0.08 or higher.

Nationally, there were 5,290 motorcyclists killed in 2008, and 59% of them were not wearing helmets. Those who were killed that had blood-alcohol levels of 0.08 or higher amounted to 30%, and 35% of them were speeding.

In 2009, there were 3,736 motorcycle crashes in the state of Pennsylvania. Those injured in motorcycle crashes numbered 3,677, and fatalities amounted to 204 people that year. Of those accidents, 712 involved motorcycles that hit fixed objects. And with nearly half of all deaths in the state involving drivers or passengers who weren’t wearing helmets, we see a frightening theme emerging.

In 2010, there were 3,930 motorcycle accidents in Pennsylvania, an increase from the previous year. Fatalities that year numbered 223; 202 were drivers and 21 were passengers. Motorcycle riders under the influence of alcohol during the crashes came in at 23%.

If you are injured in an accident, contact The Law Offices of Samuel Fishman as soon as you can. Witnesses are often harder to track down as time passes, and cases become harder to prove as evidence fades.

When you have been a victim of a motorcycle accident that someone else caused, you should receive sound guidance about how to proceed further. Schedule a free case evaluation now to get help for your case.